In the summer of 1863, only a short time after the Union's grateful success at Gettysburg, President Abraham Lincoln received a letter from Giuseppe Garibaldi, one of the heroes of Italian Risorgimento ("rising again"), which resulted in the liberation of the Italian people from foreign powers and political control of the Vatican, and culminated in the formation of the modern Italian state in 1861.  Garibaldi and his famous "red shirts" invaded Sicily, and his "Expedition of the Thousand" in 1860 made him an international figure, who in turn took an interest in freedom movements, including  the abolition of slavery in the United States.

Garibaldi's letter to Abraham Lincoln is part of a larger story in which he was sought out as a possible leader in the Union army.  According to the Civil War Trust, the Italian leader was offered a Major General's role by Lincoln in 1862, which he declined.  Garibaldi had lived in the United States for a short time in the previous decade, and was not willing to leave the affairs of liberation in Europe to support Lincoln's army.  However some actual Garibaldini, or at least his Italian admirers, apparently did come to the support of the Union effort, along with other immigrants who identified with the "Red Republican" movement in Europe. The Civil War Trust also notes that the 39th Infantry of New York was named for Garibaldi during the war. 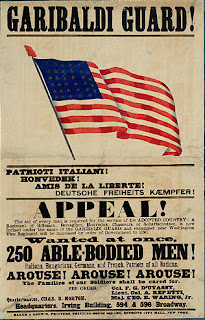 It almost goes without saying that Brown's death in Virginia as a martyr for black freedom resonated both across the Atlantic into Europe as well as into the Caribbean among Haitians, Puerto Ricans, and others seeking independence and liberation.   The hack job that historians in the United States accomplished regarding Brown during the 20th century has effectively erased from our national memory the degree of fame and admiration that Brown enjoyed posthumously at home and abroad. Whereas most people in the United States have been propagandized to associate Brown with killing and violence, he was in his own generation despised by only a few--mainly the slave holders and people of the South who generally preferred to worship terrorist-thugs like Jesse James because they represented "Southern rights."

The letter from Garibaldi is interesting for a couple of reasons beside the obvious fact of correspondence between two epic 19th century figures.  First, there is a real naivete in Garibaldi's perspective, first in his assumption that Lincoln was primarily a figure bent on liberation.  No doubt this resulted from the President having issued the Emancipation Proclamation effective at the beginning of that year.  However, the Proclamation was intended only to liberate enslaved people in rebellious states, probably to protect the legality of the Union army in gathering "chattel" that yet belonged to slave holders.  Certainly it was not the stroke of liberation that Garibaldi (and many others since then have) believed it to have been.  Needless to say, the legacies of Lincoln and Brown, respectively, have both been shaped by historical hyperbole, although in Brown's case it is almost always in the negative, whereas Lincoln has been almost deified in political terms.  Certainly, if any adjective best suits Lincoln as an emancipator, it is hesitant.

Another point that we would find somewhat embarrassing today is Garibaldi's self-identification as one of the "free children of Columbus."   It is true that Italian people in the United States historically harked to Columbus as a point of pride in their history, although I suspect this was as much manufactured for them by the Anglo establishment of the United States in their hopes of shaping and processing the flow of Mediterraneans that had started trickling into North America in the mid-19th century--a trickle that turned to a flood by the turn of the century.  That Garibaldi thought Columbus a heroic figure is no surprise; he had lived in New York for a short time and had been exposed to the rhetoric that greeted early Italian immigrants.  Like so many people, Columbus was yet known only as a hero of discovery and the advancement of western culture--and otherwise there were no Italian figures of an international nature to which Italian immigrants could attach themselves, although one wishes that Italian Americans subsequently would have traded in Columbus for Garibaldi himself, who is a much more admirable figure. 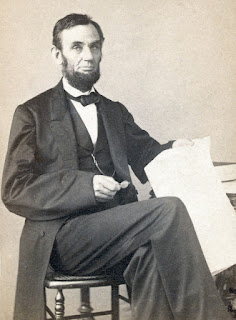 Finally, and the reason the letter is posted, is that Garibaldi assumed that Lincoln shared in his admiration for John Brown, whom he believed to be one of the great men in the history of modern civilization.  Lincoln may have winced when he read Garibaldi's words, calling him an "heir" to Brown's legacy, as well as his crediting Brown as having conveyed the teachings of Christ to his generation.  Of course, Garibaldi had undoubtedly read of Brown's famous words in a Virginia court in 1859, which included references to the the Golden Rule of Christ, so his association has merit, and was widely shared in that generation.

This letter reminds us that throughout his presidency, and increasingly so perhaps, Lincoln was never free of John Brown's haunting legacy.  Although he had entered the White House with the intention of saving the Union with or without emancipation, in time Lincoln came to realize that he could not avoid doing precisely what Brown had hoped to do from the start--except with considerably less violence than Lincoln ultimately had to employ in order to destroy slavery.
-------

In the midst of your titanic struggle, permit  me, as another among the free children of Columbus, to send you a word of greeting and admiration for the great work you have begun. Posterity will call you the great emancipator, a more enviable title than any crown could be, and greater than any merely mundane treasure, You are a true heir of  the teaching given us by Christ and by John Brown. If an entire race of human beings, subjugated into slavery by human egoism, has been restored to human dignity, to civilization and human love, this is by your doing and at the price of the most noble lives in America.
It is America,  the same country which taught liberty to our forefathers, which now opens  another solemn epoch of human progress. And while your tremendous courage astonishes the world, we are sadly reminded how this old Europe, which also can boast a great cause of liberty to fight for, has not found the mind or heart to equal you.