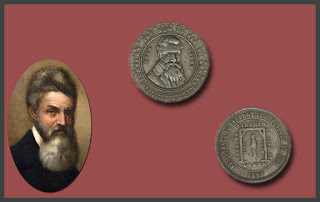 On Thursday, June 23, David Lieberth, the chairman of the Summit County Historical Society, is lecturing on the life and legacy of the abolitionist John Brown.  Brown, a native of Ohio's Western Reserve, spent a good many years living in Akron, particularly during his association in business with the ill-starred Ohio magnate, Simon Perkins Jr.  Lieberth, who is also the former deputy mayor of Akron, is speaking in a summer long program that focuses on the famous Ohio county's relationship with the 19th century movement to abolish slavery and the modern history of civil rights.  Throughout the summer these events take place from 4-6 P.M. at the John Brown House, 550 Copley Road, Akron.  For his presentation,  Lieberth also will be joined by artist and sculptor Woodrow Nash, who will speak on working as an artist in the Maple Valley neighborhood of Akron. 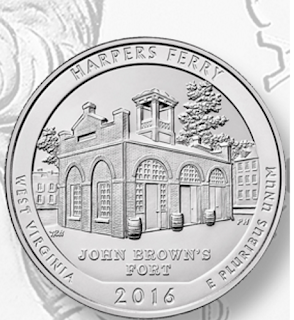 "This new [Harper’s Ferry quarter] recognizes one of the most historic towns in West Virginia – known for its significant role during the Civil War. The quarter’s reverse side depicts John Brown’s Fort, the site of John Brown’s last stand during his raid on the Harpers Ferry Armory....

Thomas Hipschen is the artist behind the design of this new quarter. Hipschen is a member of the Artistic Infusion Program at the United States Mint and has been a regular visitor to Harpers Ferry for the past 40 years. This is the first time one of his designs will appear on a circulating coin, and Hipschen says he chose John Brown’s Fort because it’s so iconic.

'It’s the only part of the original arsenal that still exists,' Hipschen explained, 'It’s a major point in history; it was almost a trigger point for the Civil War. Later on, it became a meeting place for black groups that turned into the NAACP organization. It just has so many different points in history that makes it important.'

Harpers Ferry National Historical Park is one of four other national park sites in West Virginia and one of 411 sites in the country." 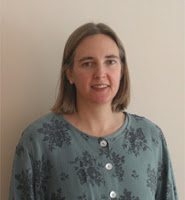 Sculptor of Harper's Ferry Commemorative Quarter is Descendant of Hector Tyndale, Who Escorted Mary Brown to Virginia in 1859

"Philadelphia-born sculptor Phebe Hemphill created the image that adorns the new quarter. A graduate of the Pennsylvania Academy of the Fine Arts, she has worked for the U.S. Mint for 13 years.

And though she has never spent time in Harpers Ferry, she does have a unique tie to John Brown. In a phone interview, Hemphill recounted that she’s a descendant of Hector Tyndale, a Philadelphia businessman who agreed to escort Brown’s wife to Charles Town in late 1859, for a final jail visit and then to recover his body following his execution for treason." 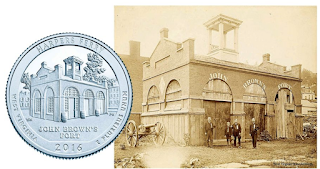 "Harpers Ferry National Historical Park is being celebrated with a quarter featuring the firehouse used by John Brown during his history-changing October 1859 raid. The image on the coin is an accurate depiction of the current firehouse and its location in the lower town of Harpers Ferry. However, the firehouse and its location are very different from the actual building and setting that ignited America’s Civil War. This is the challenge for historians and park personnel. In his famous book, Sacred Ground: Americans and their Battlefields, Edward Tabor Linenthal, provides examples of how we change our history by the ways we preserve and honor it."


Excerpted from an op-ed by Scot Faulkner, "Commemoration conundrum: Harpers Ferry exemplifies the difficulty in preserving American history."  The Washington Times, 31 May 2016.
Posted by Louis A. DeCaro, Jr. . . at 11:59 AM