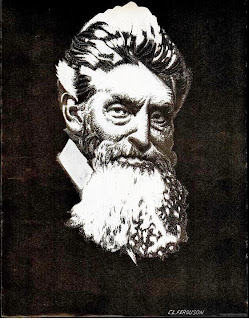 John Brown: Debunking Myths and Liberating Truths--Reflections on His Last Days as a Prisoner in Virginia

The story of John Brown is always close to the surface of political and social discussions relating to race and society. Recently, Brown's story has been revitalized, although often writing on Brown is hackneyed and misrepresentative of the man and his intentions. "Drive by scholarship" and novelists have had their way with Brown, but in depth and politically-informed readings are necessary to properly understand his significance as a fighter for justice in the USA. Biographer Louis DeCaro Jr., whose recent books provide an unprecedented study of Brown as a prisoner in Virginia, argues that much of the conventional understanding of his actions in Kansas and Virginia have been misrepresented, even in the most recent works of acclaimed authors. Brown as prisoner provides a perspective by which we may correct historical errors, challenge bias, and set his story straight over against this nation's commitment to chattel slavery, racism, and white supremacy. As Brown's most prolific biographer, DeCaro invites Larry Lawrence, the chairman of the John Brown Society (NYC) and the actor Norman Marshall, a portrayer of Brown on the stage and activist in preserving Brown's legacy, to participate in a panel discussion with an eye toward the implications of Brown's political and social significance in an era when "Black Lives Matter" and the struggle for economic justice are so relevant to the political discussion in 2016.

Louis A. DeCaro Jr.--biographer of Brown, author of four books, including his most recent works, FREEDOM'S DAWN: THE LAST DAYS OF JOHN BROWN IN VIRGINIA, and JOHN BROWN SPEAKS: LETTERS AND STATEMENTS FROM CHARLESTOWN (both published by Rowman & Littlefield, 2015)

Larry Lawrence--founder and chairman of The John Brown Society (NYC), a long time activist, scholar, and advocate for the Left, and an authority on Brown scholarship.

Norman Marshall--veteran actor, activist, and author who has specialized for years in bringing the John Brown story to the stage in the one-man play, JOHN BROWN, TRUMPET OF FREEDOM.

Click here for information on the 2016 Left Forum Program and registration.
Posted by Louis A. DeCaro, Jr. . . at 9:41 AM