For the Record--
Brief biography of “Mary A, wife of John Brown of Harpers Ferry” interred at Madronia Cemetery in Saratoga, California.

John Brown and his first wife Dianthe Lusk Brown emigrated from Hudson, Ohio in the same period (1826). Brown built a tannery which was innovative in methods. He organized a school with the Delameters; their oldest sons were contemporaries and lifelong friends. Brown was appointed postmaster of Richmond Township by President John Quincy Adams. The tannery is owned by the John Brown Heritage Association of Meadville, named to the National Register of Historic Places in 1978.

Dianthe died with complications of childbirth in 1832, leaving five children between the ages of three and twelve. Mary was asked by the widowed John Brown to be his second wife while she assisted the household following the death of Dianthe. They married in 1833, when she was seventeen and John Brown was thirty-three.

Mary bore thirteen children in the next twenty years, only six of whom survived to adulthood. Four were taken in a cholera epidemic in Franklin, Ohio, where Brown had moved in 1835 to begin new businesses. In 1846 John Brown and Col. Simon Perkins, son of the founder of Akron, Ohio began a wool-manufacture which brought him and his young family to Springfield, Massachusetts.

Frederick Douglass met the Browns in Springfield in 1848 and wrote movingly of Mary’s participation in the Underground Railroad for people seeking freedom. In 1849 an agreement was made with Gerrit Smith, an abolitionist in New York, for John and Mary to live in a cooperative African American community in the Adirondack Mountains.

John Brown joined his older sons and their families who emigrated to Kansas to lead armed defense of freestate settlers from 1855 to 1858; Mary and the children remained in the Adirondack community of North Elba. When her husband was hanged in Virginia on December 2, 1859, Mary journeyed with abolitionists to visit him in jail and returned John Brown’s body to their New York farm, which is now a state memorial park.

The story of John Brown embracing an enslaved mother and child on his way to execution is Mary’s deliberate contribution to the meaning of the sacrifice of her family. She was entrusted with the letter expressing his last wish that slaves be his attendants rather than southern ministers. Mary was the only visitor allowed to see Brown on the day before his hanging. She read the contents to the New York press, meeting them in interview alone outside the jail.

Before the letter was delivered to Mrs. George Stearns in Massachusetts the widow Mary Brown hand-copied it for her husband’s legacy, which was recognized by Boyd Stutler as her handwriting. She advised artist Louis Ransom who painted the scene envisioned by the poets and journalists in 1860 and actively participated with biographer James Redpath.

Mary Brown, three daughters, and only surviving son Salmon came to California in a yearlong journey that ended in Tehama County in 1864. She is remembered as “a ministering angel” and wagon train leader of determination and spirit. There was real danger to Mary and her family from Confederates as they crossed the country. Protection came from other emigrants, including an African American group who joined them for that purpose, dashing headlong for a full week to reach a U. S. military fort.

Daughters Annie and Sarah taught at “Colored” schools in and near Red Bluff, publicly supporting an end to racial segregation, as did their mother. Sarah mentored the first African American teacher to become certificated in California, Clara Logan Frazier. People in the community raised $450 to build Mary a home in January 1866 which still stands today and is recognized for her residence.
When the Colored School was burned by arson in 1869, Mary and her daughters moved to Rohnerville, Humboldt County, where Salmon and his family were raising sheep. Annie married Samuel Adams and remained; Ellen married teacher James Fablinger from Illinois in 1876. Finding employment at the Oak Street School, James brought Mary Brown, Sarah, his wife and three very young children to Saratoga in 1881. They purchased a cabin on top of the mountain from Rufus L. Higgins of Santa Clara, who led a contribution campaign for the family of abolitionist John Brown. Finding the commute too steep the family rented the McGrew House on Saratoga Avenue.

In 1882 Mary learned that her son Watson who died at Harpers Ferry, his remains liberated by the Union Army in the Civil War, was to be ceremoniously interred with his father at North Elba. Leaving Sarah at her new job at the U. S. Mint in San Francisco, Mary journeyed alone to Meadville to visit relatives, then to Boston and the Adirondack farm for Watson’s burial. On her return she visited Kansas for the first time, speaking about her husband and the end of slavery. She donated the gold Medal of Honor from France struck for John Brown to the Kansas Historical Society. Her August – December 1882 journey went to Humboldt County to visit Annie and the grandchildren, returning to Saratoga where she lived but another year. She sold the mountain property to her daughters for $1 in 1883, passing away from cancer on February 29, 1884.

Mary Brown and her daughter Sarah are known for missionary activities with the Saratoga Congregational Church and forthright opposition to anti-Asian laws and discrimination. Sarah requested that a mission established in China following the exclusion and expulsion of pioneer Chinese laborers in the late 1800s be named for her mother. As Japanese family immigration began in the early 1900s Sarah learned the language from local residents in order to teach English within the auspices of the Congregational Church of Saratoga and the American Missionary Association.
Community friendships of Mary and her namesake Fablinger granddaughter with Amanda and Florence Cunningham have the lasting result of permanent stewardship at the Saratoga History Museum. The friendship of Sarah Brown with Lucy Higgins of Santa Clara, both ardent suffragists, is a legacy remembered and passed on at The Bancroft Library, The University of California, Berkeley, in the present day. 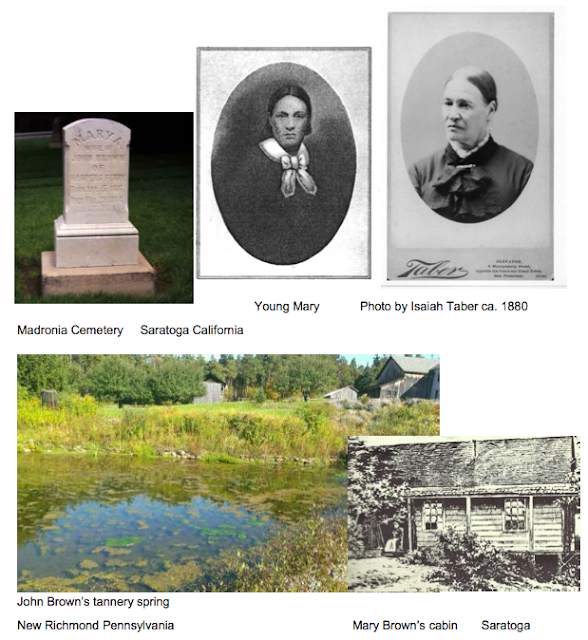 DeCaro, Louis Jr. Fire From the Midst of You; a religious life of John Brown. New York University Press, 2001.

Laughlin-Schultz, Bonnie. The Tie That Bound Us; the women of John Brown’s family and the legacy of radical abolitionism. Cornell University Press, 2013.

Libby Jean. John Brown’s Family in California, a journey by funeral train, covered wagon, through archives, to the Valley of Heart’s Delight; including the years 1833 – 1926, and honoring descendants of the Women Abolitionists of Santa Clara County, now known as Silicon Valley. “Yankee Abolitionist,” pages 13-16 and www.alliesforfreedom.org/files/Mary_Brown_Interview.pdf Allies for Freedom publishers, 2006.

__________. “Brown Family Artifacts at the Saratoga History Museum and Environs:” pages 64-65. Allies for Freedom publishers, 2009. Supplement, revisions to the catalog.

Thank you for posting. We had a good meeting at her grave, the invocation given on behalf of the incarcerated population of Santa Clara County by a member of the Blue Ribbon Commission to Investigate Custody at the Main Jail after two inmates died there in one month, September 2015. Three Sheriff's deputies are charged with murder for one of these deaths.
The minister giving the invocation was Rev. Dale Witherspoon of the Good Samaritan UMC in Cupertino, California.
Mary Ann Day Brown received three governmental proclamations for her example of racial equality, cooperation, and solidarity at the event held April 15, 2016.