Notwithstanding a gratuitous comparison between John Brown's Harper's Ferry raid with the recent occupation of the Federal Malheur Wildlife Refuge, a journalist named Kylie Pine has written a thoughtful article for the Statesman Journal [Salem, Or.] recalling that Salmon Brown once lived in that vicinity.

Salmon Brown was born to John Brown and his second wife, Mary, in Hudson, Ohio, on October 2, 1836.  Salmon was born only about one year following his family's return to Ohio after having lived in northwestern Pennsylvania for nearly a decade.  John Brown had left Hudson in 1826, yet married to his first wife, Dianthe Lusk Brown, who died in Pennsylvania in the summer of 1832.  Brown was left with six young children, which probably lessened the time of mourning.  By the following summer, Brown had developed an interest in a seventeen-year-old domestic worker, Mary Ann Day, and married her in July 1833--eleven months after Dianthe's death.   While the brevity of his mourning and his choice of a teenage bride has invoked criticism by contemporary authors, it is overlooked that such practice was common in the agrarian world of the US in the19th century. Brown's father, Owen, was similarly widowed in 1808 at thirty-eight years of age, and remarried a young woman of twenty years the following year.

Salmon was the third-born child of John and his young wife.  (Their first born, Sarah, died at nine years of age in 1843.   Three years later, Mary gave birth to another daughter, named Sarah in honor of her deceased sister).  Salmon apparently was named for a paternal uncle, Salmon, who had died three years prior (that Uncle Salmon himself seems to have been named for an elder brother of the same name, who had preceded him in death in 1796).

Pine writes that she was initially cautious about accepting local lore, and when she tried to find Salmon Brown in conventional sources like census and city directories, she got nervous.  "Luckily, Brown was a bit of a celebrity," she writes, "and newspaper records contain countless articles by him and about him that start to give view to his experience."  With no apparent background in Brown studies, Pine provides brief background to Salmon, noting his "claims to have participated in the Battle of Black Jack" in June 1856, something the journalist could have verified by consulting any good Brown biography.  Surprisingly, Pine mentions nothing of Salmon's involvement as one of the Pottawatomie killers of May 1856, when Brown, his sons, and some free state associates conducted a preemptive strike against a cadre of proslavery conspirators, effectively snuffing out a plot to attack the Browns in their own settlements near Osawatomie.

Interestingly, in consulting local newspapers, Pine writes that Salmon's wife, Abbie Hinckley Brown, said the reason that her husband did not join his father at Harper's Ferry in 1859 was that one of the sons had to stay at home.  "That lot fell to Salmon.”   Villard's biography, presents a different excuse.  According to Salmon, the reason he did not join his father's effort in Virginia was because he believed he would delay due to a propensity to detail.  While I have not made exhaustive study of the point, I find both explanations questionable, especially the latter.  The latter seems most likely "20/20 hindsight" based on the outcome of the raid and the actual reason for Brown's failure to get out of Harper's Ferry in a timely fashion.  It is possible that Salmon did refrain from going to Virginia because his two brothers--Watson and Oliver--were intent on going.  Assuming this was the case, Salmon would have been the only son of John and Mary Brown left behind, and as it turned out, both brothers did not return alive.  Still, it is not clear that Salmon was in any way constrained to remain home.

Pine writes that Salmon's family association with the controversial abolitionist "would affect the course of the rest of his life," which was undoubtedly true of all the Brown children.   Pine notes that when the Civil War broke out, Salmon enlisted and was set up to become an officer in New York's 96th Infantry but never saw action on the field. Various accounts are offered, but Pine found that "the most interesting one states that fellow officers petitioned that he be removed from their ranks," fearing that their unit would be placed in greater jeopardy if they fell into the hands of rebel soldiers if the son of John Brown was among them.  There was a pervasive hostility toward the Browns in the South, so this may be the case, although the point needs greater consideration by historians. 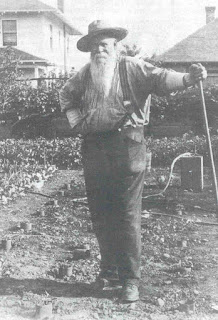 Pine notes the westward movement of Mary Brown and her children, along with Salmon, who made a dangerous journey to California during the Civil War, arriving there in1864.  Salmon eventually ended up settling in the Englewood neighborhood of Salem, Oregon, and in later years kept flocks and ran a meat market according to local sources.   "By all accounts," Pine writes, Salmon "very much resembled his famous father."  A local reporter thus wrote: “Looking closely at the portrait of John Brown and then again at his son, one can see a strong resemblance, which Mrs. Brown says is growing as her husband becomes older. The same determined look is set on the face, while in the wearing of his hair and the trimming of his mustache, the son has followed his father closely.”

Pine says that Salmon enjoyed something of a popular status in these later years, and that his letters can be found in opinion pieces in local newspapers.  Salmon and Abbie moved to Portland around 1901, notes Pine, and in his last years he suffered with the physical effects of an accident in earlier life.  In his very last years, Salmon was mostly bedridden.  Sick and discouraged, Salmon decided to end his own life.  "He died in Portland from a self-inflicted gunshot wound in 1919," Pine writes.  It may be significant that he chose to kill himself on May 10, the day after his beloved father's birthday. In 1908, he told interviewer Katherine Mayo that he had been among one of John Brown's most devoted family members.  "Father depended on me, too," Salmon concluded.