Although the The Public Life of Capt. John Brown by James Redpath was published in 1860, after the abolitionist's death, it was a work already in progress while the Old Man was awaiting execution in Virginia, in November 1859.  At the time, Redpath was not the only one interested in doing a John Brown biography, since abolitionist author, Lydia Maria Child also had designs on the same project. While both Child and Redpath intended to use the opportunity as a means of supporting Brown's family, the Brown family preferred Redpath, whose book was published by the Boston firm of Thayer and Eldridge to great acclaim.1 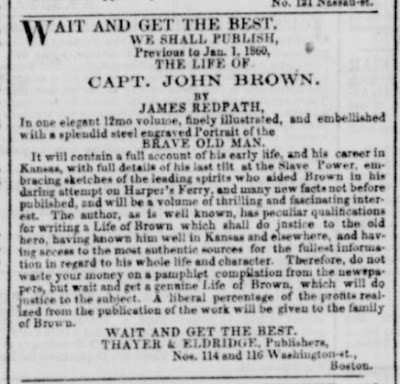 This ad, headed by "Wait and Get the Best," appeared on November 14, 1859 (p. 1) in Horace Greeley's New York Tribune, promising a "full account" of Brown's life and a "splendid" engraving of the "Brave Old Man."  The ad seems mainly to have been intended to diminish one or two newspaper compilation efforts, neither of which were intended to aid the Brown family.

Most prominent in this regard was the booklet produced by New York publisher, Robert M. DeWitt, entitled, The Life, Trial, and Execution of Captain John Brown, which actually was published in late 1859, before the release of Redpath's book.  The other effort was produced by Boston publisher, Robert Campbell, entitled, The John Brown Invasion: An Authentic History of the Harper's Ferry Tragedy, published in 1860. Redpath's ad in the Tribune in November 1859 was evidently intended to undermine DeWitt, but he probably had his eye on both rivals.  "Therefore," goes the ad, "do not waste your money on a "pamphlet compilation from the newspapers, but wait and get a genuine Life of Brown, which will do justice to the subject."

As the last days of John Brown passed, Redpath busily engaged himself in collecting letters and information for his book.  On November 30, the Tribune reported Redpath's work continued, and that he "urgently requested that a copy of all communications received from [Brown], as well as of the letters to which they were an answer, should be printed or sent to the undersigned, who has the matter in charge."2  On the day of Brown's hanging, Redpath wrote from Malden, Massachusetts, once more to the Tribune.  It seems that Mary Brown had complained that the New York Herald had published a letter from Brown to his family which they had never received, and believed the letter had been stolen from the mails.  Redpath asked the thieves to forward it to the widow on pain of being traced and exposed.3  Whether or not the letter was stolen, or if stolen it was recovered, is not clear.

In 1860, Redpath's biography was published to great acclaim and controversy, respectively, from Brown's admirers and detractors.  But as John McKivigan observes, it was a best seller that defined biographical writing on Brown for decades to come.4  It was followed the same year by Redpath's tribute volume,  Echoes of Harper's Ferry, which contains letters to Brown, as well as other writings in tribute to the martyred abolitionist, likewise published by Thayer and Eldridge of Boston.  Redpath is remembered as Brown's first and most influential propagandist.  Detractors, then and in subsequent years, have charged the "Roving Editor" with producing a panegyric and legend.  However, Redpath preserved primary sources and wrote from a personal perspective that would otherwise have been lost had he not produced these works.  In the long run, too, Brown's detractors have largely failed to present him fairly, instead erring on the side of misrepresentation.  In my opinion, today's students of Brown are better off having Redpath's work than much of what was written about him in the 20th century.
==========
Notes

1 On December 1, 1859, Redpath wrote to the Tribune: “[Child] had been advised to write it, but does not now at least propose to do so, and has kindly yielded to me her claim to the use of ‘the facts and incidents of John Brown’s earlier history."  James Redpath, "John Brown and G. W. Brown," New York Tribune, 7 Dec. 1859, p. 3.  For more on the Lydia Maria Child episode, see Bonnie Laughlin-Schultz, The Tie That Bound Us: The Women of John Brown's Family and the Legacy of Radical Abolitionism (Ithaca: Cornell Univ. Press, 2013), 79-80.  Also see my books, Freedom's Dawn: The Last Days of John Brown in Virginia, pp. 134-35, and John Brown Speaks: Letters and Statements from Charlestown Jail, pp. 10-12 (both Rowman & Littlefield, 2015).