A Point of Clarity--
The Historical Values of this Nation, not John Brown's Legacy, Are "Complicated"

In the weeks following the 215th birthday celebration of John Brown, the Adirondack Daily Enterprise (12 May 2015), a newspaper published in the vicinity of the abolitionist's farm and gravesite, featured an insert soliciting reader responses.  The "web poll" states that Brown "left a complicated legacy when he was hanged in 1859," and then asked readers if "on the whole," they were "in favor of what he did."  This is a point I've addressed on this blog before, and one which I recently discussed in my brief presentation at the birthday celebration in Lake Placid as a guest of the organization, John Brown Lives! 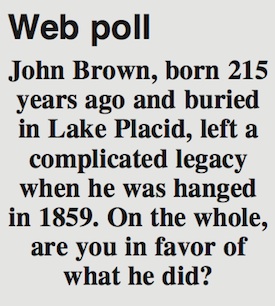 The notion that Brown was a "complex" man, or that his legacy is "complicated" has no real substance for any one who is willing to tell the truth about the history of slavery and the United States.  Indeed, what is "complicated" is the way in which white society has treated slavery.

The facts are that this nation was built on chattel slavery, that both the North and South grew rich on stolen black labor, and the constitution of our nation contained with it the provision for this gross injustice.  The facts are that the vast majority of whites in the "free states" were indifferent to the human rights of enslaved people, and that a dense culture of racism formed throughout white society as a result of black chattel slavery.  The facts are that even a majority of people who claimed to be "anti-slavery" were against the brutal system in theory, but were far more willing to tolerate it rather than see the nation split over it.  Black people never had but very few actual allies among the whites, and the only reason why slavery was ended was because the South was so determined to pull out of the Union, and the North was in large part unwilling to let the South, its profits, and the Union be taken away by the slave holders' rebellion.  The facts are that many whites did not oppose slavery until it became clear that the Civil War had to resolve the issue of slavery once and for all, and it was only the circumstances of the war that finally drove white society to resolve the defeat of the South and the end of chattel slavery.

Yet having defeated the rebels, the North shortly reinstated the rebels, allowed many of them to run for and take public office, and exacted no political penalty from them for the rebellion.  The rebel leader, Jefferson Davis, served but a short time in jail and was freed.  Only one so-called Confederate officer was hanged, and that was because of his criminal role in the case of the hellish Andersonville Prison, were many Union soldiers died cruel deaths.  Not only were former rebels allowed to rejoin the Union with but a mere slap on the wrist, but within a decade of the end of the war, blacks were essentially sold back into the power of white supremacy in the South and the long reign of terror, the Klan, and the rise of Jim Crow all came forth because of the "complicated" nature of white society in regard to black people.

These are not popular words, but they should be written because the notion that John Brown was complicated is such a farce, a kind of straw man that some whites continually raise up and knock down for reasons that can only speak to the need to further evade the truth--whether or not they even realize it.  People are not stupid, so the fact that they never arrive at the plain facts of history suggest a problem of the heart more than the intellect.

When was John Brown ever complex, and where is his legacy "complicated"?  Brown was always for human rights, always against slavery, always for black equality, always against slavery's brutality, always ready to fight slavery's terrorists, always trying to find a way to destabilize and undermine the "arrant whore" of chattel slavery.   Where is the "complicated" nature of his legacy?  Is it his minimal resort to violence?  Why is this so complicated for a  nation of white people who glorify violence in their history of domestic and foreign wars?  Is his belief in the Christian gospel "complicated" because he was no pacifist?  But the vast majority of self-professing Christians in this nation have never been pacifist, and the vast majority of Christians in this nation have condoned wars and military actions that resulted in far worse atrocities than Brown ever accomplished in killing five proslavery thugs.

Why is the legacy of Brown so "complicated"?   The answer is that it is not.  The answer is that the legacy of the United States--born as a slaveholding democracy--was a walking contradiction from the start.  Where in the world can one find people like Thomas Jefferson--full of the ideas of liberty, freedom, and equality, a "liberal" in the classical sense, and yet also a racist and slave holder?  Is that not "complicated"?   The same applies to George Washington and so many others.   What of Lincoln, no slave holder to be sure, but one quite willing to subordinate the rights of blacks to the priorities of white society.  Why do we not hear of Lincoln's "complicated" legacy?  Why is it that the man with the most single-minded commitment to ending slavery and promoting human rights is branded "complicated"?

The answer is because the public mind of this nation has yet to come to terms with its own nation's guilty history, the hypocrisies and inconsistencies of its national heroes and founders, and the flawed and failing manner in which it has repeatedly dealt with the rights of minorities.  To the lying mind, truth is always "complicated," while the liar finds comfort in the entangled half-truths and deceptions of its own making.

The Adirondack Daily Enterprise is asking the wrong question in its "web poll."  The question the editor of that paper should be asking is, "Was John Brown right in trying to arm enslaved people to win their freedom?"  I would not be surprised, of course, that many would respond in the negative. After all, this is the United States, a complicated place.

The Soul of Truth said...