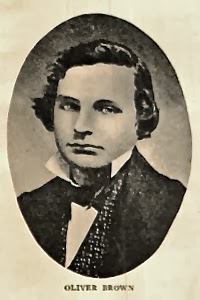 It was good to see a post detailing some of the story of Oliver and Martha. As I understand it, Annie Brown always considered Martha the unsung heroine of the Harpers Ferry action. Martha went to the Kennedy Farm that summer of '59 to be with and support her husband despite having sprained her ankle badly the night before her departure for Maryland. It's also my understanding that her moving in with the Browns after her wedding to Oliver was more than just Oliver's request. Martha's parents disowned her rather than give their blessing to her marrying anyone in the Brown family. She became a much loved daughter and sister to the Browns. After Oliver was killed, all the Brown women at home in North Elba fell ill and Martha nursed them all, as her pregnancy neared full term. After they were well, she fell ill with the fever from which she never recovered, and delivered the baby while still sick. She named the baby Olive after her husband. The baby was quite feeble. She said to Annie that if the baby lived she would try to get well and care for her, but if Olive died, then she would die too for she would have nothing more to live for. And Olive did die, followed in death shortly thereafter by Martha. Annie said that throughout the entire period from October until her death in January, Martha never shed a tear until they brought the baby's body to her and a few tears fell on the infant's cheek. Oliver's wife also paid the ultimate price, and was indeed a heroine of Harper's Ferry. We wrote a song about it entitled "Love and Honor" on our CD "The Civil War: Songs and Stories Untold"

Thank you Greg. Good to hear from you and thank you for the added insights. Of course, thank you and Terry for your great music!