In the previous installment of this blog, I was pleased to feature a review ("The John Cook Book," 15 Jan.) of Steven Lubet's new book, John Brown's Spy: The Adventurous Life and Tragic Confession of John E. Cook.  The review is by H. Scott Wolfe, a research librarian from Galena, Ill., and an aficionado on matters of Brown and his raiders, who is also a friend and regular contributor to this blog.  The other day, I was happy to hear from Steven Lubet, who would like to respond to some of the issues raised by Mr. Wolfe, and I'm happy to post the thoughtful response that follows.--LD

H. Scott Wolfe has decidedly mixed feelings about my book, John Brown’s Spy: The Adventurous Life and Tragic Confession of John E. Cook, which he recently reviewed on this blog.  He had kind words (which I appreciate) for the chapters dealing with Cook’s escape from Harper’s Ferry and his subsequent capture and trial, which comprise the latter two thirds of the book.  On the other hand, Wolfe did not care at all for the opening chapters on Cook’s early life, which he considered too speculative.  I would never attempt to change a reviewer’s mind, but Wolfe’s critique – which he presented as a guide to “all future historians and biographers” – actually provides an interesting opportunity to discuss the ways in which historians approach probabilities, inferences, and deductions from the available sources. 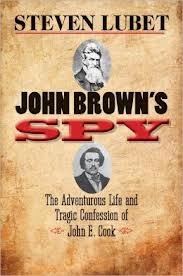 Wolfe’s primary complaint about JB’s Spy was my use of what he calls “conditional verbs and adverbs,” which he considers out of bounds.  To Wolfe, there is no place in history for probabilities or likelihoods, and he admonishes writers to stick strictly to “the facts.”  As I will explain below, any product of such Wolfean discipline would be shallow and unenlightening.

All histories and biographies seek to answer two questions:  What happened? And why?  The second question necessarily involves some degree of speculation.  Historical reasons, motivations, causes, and objectives – on both individual and broader scales – are inevitably ambiguous, indistinct and obscure.  In the absence of a diary – or even if we had one – who can say what first caused Abraham Lincoln to oppose slavery, or Stephen Douglas to tolerate it?  There are many opinions, but there is no definitive answer.  And it is much harder to reconstruct the early life of someone such as John E. Cook, who was obscure until eight weeks before he died at the young age of thirty.  To get at the reasons behind Cook’s actions, therefore, one obviously must look at the era in which he lived and the people and events surrounding him.  That is why so many biographies are subtitled “the life and times.”

So much for the general case; now let’s consider a specific example.  Wolfe was deeply troubled by my discussion of Cook’s adoption of abolitionism, given my observation that there is “no precise record” of his conversion to the cause.  Lacking such a record, I turned to the political and social forces that were sweeping the nation at the time, including their impact on the neighborhoods in which Cook worked and lived.  Wolfe says this amounted to a “virtual Hurricane Sandy of speculations,” but in fact I drew only measured and supportable conclusions from the available information.

Here is what we know:  Cook was living in Brooklyn in 1854, working as a law clerk.  In addition to his job – for which he showed little aptitude – his main pursuits were writing poetry for young women and practicing with firearms.  According to his employer, Cook had shown no interest in abolition.  Then, in September 1855, Cook departed New York for Kansas, where he joined the Free-State militia.  Those are the facts, but why did he do it?  The question comes naturally, and I admit of course that the answers are unavoidably somewhat speculative – but that is what makes history interesting.
And so, I point out that Henry Ward Beecher was at that very time preaching abolition from the pulpit of the Plymouth Congregational Church in Brooklyn, while recruiting “emigrants” for the anti-slavery crusade in Kansas.  Yes, I do infer that Cook “would have been drawn” to Beecher, but that is not much of a conjecture.  Beecher was, in the words of his biographer, “the most famous man in America,” and almost nobody passed up the opportunity to hear him speak.  People traveled hundreds of miles to hear Beecher, while Cook lived nearby in Brooklyn.  Moreover, Beecher was a Connecticut Congregationalist, as was Cook, so it is no great leap to conclude that Cook sometimes would have attended Beecher’s sermons.  Would any Congregationalist in Brooklyn have stayed away from Plymouth Church?

But wait, there’s more.  The pastor at a nearby Dutch Reformed church (attended by Cook’s sister and brother-in-law, with whom he was living) blamed Cook’s abolitionism on “radical preachers” who spread “diabolical resentments” over slavery.  Although the pastor did not name any particular radical preacher, the most prominent and outspoken of them all, and the one closest at hand, was Henry Ward Beecher.  And finally, it is undeniable that Beecher inspired thousands of young men, mostly New Englanders like Cook, to join the war in Kansas.  “Beecher’s bibles” – that is, rifles in the hands of Free Staters – were famous for a reason.

I explained all of that in JB’s Spy, before reaching the very modest conclusion that Cook was influenced by Beecher.   That is something similar to suggesting that Lady Gaga was influenced by Madonna (or Chris Rock by Richard Pryor), even if one cannot verify attendance at a specific concert.  I suppose I could have omitted Beecher from the book, leaving Cook’s motives and influences completely unknown, but that would have been a disservice to readers who – pace Wolfe – are interested in the context of the story.

Wolfe supports his minimalist view by invoking the wisdom of the old television series Dragnet, in which Sgt. Joe Friday always requested “just the facts, Ma’am.”  Perhaps that was a suitable modus operandi for a fictional cop on a twenty-two minute television show, but it is not the way that detectives operate in real life.  In an actual police investigation (a subject of which I have some professional knowledge), the facts are just the starting point.  Witness interviews generate inferences and deductions, which develop into theories, which then lead to narratives.  Any cop who limited an investigation to the so-called facts would quickly be out of a job.

A similar situation confronts historians, making probabilities and inferences both permissible and unavoidable when writing about the past.  As a stylistic matter, of course, it might be that John Brown’s Spy made too frequent use of conditional adverbs.  If so, it was only because I attempted to draw a bright line between established facts and well-supported (and clearly identified) suppositions.  A book that neglected such context would be a list, not a biography.  In any case, I hope that others will read John Brown’s Spy and reach their own conclusions.

I appreciate the contribution of Dr. Lubet, in taking the time to respond to my recent review of his book: John Brown’s Spy, and, also, Dr. DeCaro’s posting of our opposing viewpoints. For if there were no differences in opinion, we would not have horse races.
First, to satisfy my gargantuan ego, I must state that I revel in the honor of being the namesake of the newly coined “Wolfean discipline” of historical research…despite its “shallow and unenlightening” devotion to facts.
Granted, the early life of John E. Cook lacks a cornucopia of primary source materials. And I would not question the way some historians “approach probabilities, inferences and deductions.” And true, those inferences and deductions can develop into “theories” and “narratives.”
But there resides the danger…particularly in the case of John Brown historiography. Ever since the gibbet tightened, there has been an eternal deluge of deductions and inferences…which have evolved into narratives that bear no resemblance to FACTS.
There is really nothing enlightening about speculation. It may stimulate the imagination or open up new realms of possibilities. But it doesn’t tell you what happened. And for this founder of the Wolfean discipline, there is always room for more facts…and very little for additional “probabilities and likelihoods.” It is for our peers in the field to decide which is more useful in documenting the life (and times) of The Old Man.
H. Scott Wolfe

P. S. Perhaps the most painful aspect of Dr. Lubet’s response, at least to this son of a County Sheriff, was his deprecation of that icon…that role model…of law enforcement, Sergeant Joe Friday. Please don’t tell me he was “fictional,” and that he did not illuminate how “detectives operate in real life.” The next thing the Professor will be telling us is that Dan Mathews of “Highway Patrol” was a faker. And after I have been wearing this fedora for so many years!! 10-4!-H.S.W.