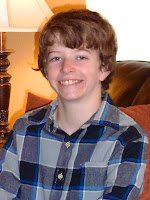 On Friday, March 9, 2012, Keegan McLean, a seventh grader in California, won the National History Day competition for his division. This year's theme is "Revolution, Reaction, and Reform," and Keegan's topic is John Brown. I was happy to be one of his resources for his project, a website that won him first place in his division.  Keegan will be competing in the State History Day competition in Riverside, California this month.  Congratulations Keegan!  Best wishes for the state and national competitions ahead. 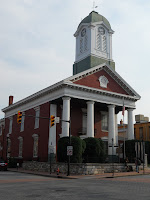 A demonstration of the state's multi-cast videoconferencing unit is set for Thursday at the Jefferson County Courthouse in Charles Town. The historic building where abolitionist John Brown was convicted of treason in 1859 was chosen to show the system can work in any kind of facility.

Aaron D. Stevens, who preferred his middle name, Dwight, was born on a farm on Route 169 in Lisbon in 1831. He worked on the family farm, becoming a passionate antislavery advocate in his youth. His cousin and close friend was Charles Whipple, whose name Stevens used by an alias later, during the conflict over the Kansas territory. His first departure from Connecticut was to fight in the Mexican War.  After returning home, Stevens again enlisted in the army, going west in 1851.  Following a conflict with an officer, Stevens was court-martialed and jailed in 1855.  Stevens shortly escaped and joined the free state forces in Kansas under Jim Lane, through which he--as Capt. Charles Whipple--made connections with John Brown.  Stevens later participated in Brown's famous Missouri raid in late 1858, in which eleven enslaved people were liberated and escorted across country and into Canada.  Stevens finally followed John Brown to Harper's Ferry in October 1859, where he was seriously wounded when the effort failed.  Stevens was jailed, tried, and convicted in the same Virginia court that condemned Brown.  Brown was hanged in December 1859 and Stevens followed him on the gallows in March 1860.  In his last letter to Jenny Dunbar, a young woman that he admired, Stevens wrote: “Slavery demands that we should hang for its protection. I regret nothing except I will not live to see this country free.”  He is buried near Brown in North Elba, N.Y., nearby Lake Placid.

Also see Tom Bosse's article on Aaron D. Stevens on the website of the Lisbon, Connecticut Historical Society
Posted by Louis A. DeCaro, Jr. . . at 10:40 PM