While the 84-year-old Litchfield resident may not have led a raid at Harpers Ferry, W.Va., nor was he hanged for treason by the United States government, Neidt and his predecessors spent their lives preserving the memory of a famous Torrington abolitionist who did. 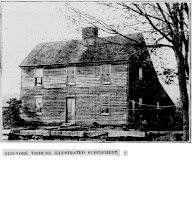 In 2004, Neidt passed that multigenerational legacy to elated officials of the Torrington Historical Society in the form of artifacts that were lovingly preserved by his grandfather Albert Neidt, and father William Neidt.  "My grandfather worked in a mill, but a group of men asked him if he would go work at the John Brown house," Edward Neidt explained. "They said ‘We’ll pay you that same amount you’re making here."   And Albert Neidt did just that, effectively establishing the Neidt family’s dedication to the man many now call a martyr for the abolition of slavery.

John Brown was born in 1800 on a vast parcel of farmland along what Torrington has named John Brown Road. Following his death in 1859, the Brown homestead became an international attraction and evolved into one of Connecticut’s first museum houses.  Much to the disappointment of the world, the John Brown house was completely destroyed by fire in 1918 - but not before Albert and William Neidt retained a handful of artifacts that were presented Friday to historical society president David Bennett and executive director Mark McEachern.  "I’m 84. My daughters don’t want these things," Neidt said. "I can’t think of a better place for them to go."

Thanks to Neidt, an original guest book cataloging the names and dates of early 20th century visitors to the John Brown site, in addition to hand-forged metal nails and a piece of the homestead’s interior paneling, will forever be preserved in the historical society’s permanent collection.  But the most unique, and perhaps most valuable piece presented by Neidt were blueprints of the John Brown homestead - drafted from memory in 1938 by Neidt’s father, who lived in the house through his early teens.  "These are the only documents in existence that the show the floor plans of the John Brown house," McEachern said. "There are no photos - this is it."

According to McEachern and Bennett, the well-preserved blueprints and accompanying artifacts will remain on the premises of the historical society for use in future exhibits, courtesy of the "Neidt Collection."