(Associated Press, Sept. 14) CHARLES TOWN, W.Va. – Attempts to sell a mansion on the site of abolitionist John Brown's execution have failed. A notice posted on the auction site says the owners failed to get their minimum asking price, which wasn't published. Bidding for the Historic Perkins House in Charles Town had been expected to begin at $950,000 last weekend.
An agent didn't immediately comment today. It's unclear if they'll try again. The 7,000-square-foot, five-bedroom Queen Anne Victorian was built in 1891, about 30 years after Brown was hanged for treason The execution site is in the yard, marked by a white obelisk.  Brown attacked a federal arsenal at Harpers Ferry in 1859, planning to seize weapons and start a revolution to end slavery. But the uprising was quashed within 48 hours.
Both Defeat and Victory: The Battle of Osawatomie Recalled 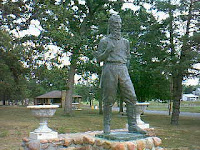 Grady Atwater, the Administrator of the John Brown State Historic Site in Osawatomie, Kansas, does an excellent job of keeping local readers informed about Kansas history involving the Browns in regular op-ed pieces in the Osawatomie, Kansas, Graphic.  Recently, he has a piece about the battle of Osawatomie on August 30, 1856, following a massive terrorist assault on the free state settlement by pro-slavery forces.  Atwater writes:

Source: Grady Atwater, “Battle of Osawatomie a pivotal moment in history,” Osawatomie Graphic (no date), on KCCommunitynews.com.
Horwitz on Brown: A Positive Pre-review
Whether or not the pre-publication remarks published on this blog had anything to do with it, a friend of Tony Horwitz has also blogged about the forthcoming Midnight Rising.  The Washington Post features the blogging of Joel Achenbach, whose blog, the Achenblog, recently featured a pre-review of Midnight Rising (Sept. 13).  Achenbach says that he is a friend of Tony Horwitz, and acknowledges that he is not a “neutral critic.”  However, Achenbach’s comments are not only positive about Tony’s book, but also convey a more appreciative understanding of Brown, something worth noting.  Readers can check out the blog article (link below), but the following lines represent the substance of his take on the manuscript:

Midnight Rising takes the caricature of John Brown and turns it into a complex and largely sympathetic portrait. . . .  One constant in his life, for decades, was his abhorrence of slavery. He brooked no compromise. He wasn’t a reformist, he was a revolutionary. And he was hardly a lone wolf: He organized a team of raiders that included African Americans as well as several of his sons. Each raider had his own (mostly tragic) story. They all believed in the justness of their cause and showed great courage, even as they had doubts about the tactical genius of their leader (he seemed to think that the ideal place to fight would be somewhere low, surrounding by high ground).

The raid failed, of course, and by many measures was a fiasco. Brown went to the gallows along with many of his comrades. But he found his voice after his capture and, in interviews and in court, struck powerful rhetorical blows against an evil institution. He proved to be prophet. The sins of this guilty land will be purged in blood, he said in his final written statement. And he sure got that right.

These are positive words.  Let’s hope that they foreshadow the way in which our man Brown will be more widely perceived as a result of Midnight Rising.  We would be foolish to think that the Old Man will ever be admired and uplifted by the majority of our nation.  However, our ongoing concern is that he will be more fairly and kindly treated, and perhaps eventually even more admired than despised, especially given his life-long and mortal struggle against the evil monstrosity of racist chattel slavery.
Source: Joel Achenbach, “John Brown and his raiders,” Achenblog, under Washington Post Opinions online (Sept. 13, 2011)
Posted by Louis A. DeCaro, Jr. . . at 11:43 PM