Was John Brown a "Complex Man"?
As usual, our friend Grady Atwater, the superintendent of the John Brown site in Osawatomie, Kansas, has written a thoughtful and educational op-ed piece in the Osawatomie Graphic, the latest one being entitled, "The Fatherly Nature Of John Brown."  Primarily it is a reflection based upon a letter that John Brown wrote (Nov. 24, 1859) to Rebecca Buffum Spring, an abolitionist who resided in New Jersey at the time of the Harper's Ferry raid.   Bravely passionate for the antislavery cause, this Quaker woman took it upon herself to go to Virginia and minister to the needs of the Old Man in his Charlestown jail cell (Nov. 4, 1859), afterward becoming a close friend--even a mother figure--to Aaron Stevens and Albert Hazlett, two Harper's Ferry raiders who followed Brown to the gallows.
Atwater notes the great concern that the imprisoned abolitionist showed for his son Jason, who had not followed him to Harper's Ferry and was then resident in Akron, Ohio. Referring to Jason as "very laborious, ingenious, temperate, honest, and truthful," but also one too modest and given to underrating himself.  Brown also admits that Jason is not like him in regard to the tendency to "assume and dictate."  But Brown the father was most concerned about getting help for Jason, evidently because he knew that his second son was impoverished, not yet having recovered from his losses in the Kansas territory.  Of course, Brown touted the unwavering devotion of Jason to the antislavery cause, too: "He will not deny his principles to save his life; and he ‘turned not back in the day of battle.’ At Osawatomie, he fought by my side.”  (The phrase, "turned not back in the day of battle," may be an allusion to Psalm 78:9, “The children of Ephraim, being armed, and carrying bows, turned back in the day of battle.")

John Brown is often portrayed as a cold father who was willing to sacrifice his sons in his abolitionist crusade with no feelings for their welfare. . . .  Jason Brown was a gentle man, more gentle than his father, and one might imagine that would create tension between the two men, and sometimes it did. However, John Brown was a loving father and loved and cared for his children. Despite personality and ideological differences, he and his children worked together to help end slavery. 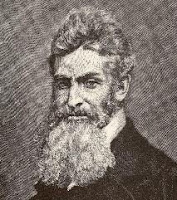 My only point of reservation pertains to the author's statement: "John Brown was a complex man who had many facets. He was an implacable foe of proslavery advocates, but he was also a caring father."  While I understand the point, perhaps this is more a matter of people's perceptions than real human complexity on Brown's part.  In fact, there is really nothing complex about someone being "an implacable foe of proslavery advocates" as well as a "caring father."  It is hardly unusual for a brave soldier to also be a loving parent, and a bold freedom fighter at best will exhibit the highest sense of love and devotion to his or her family.  Furthermore, I would argue here as I have done before (see this blog, entry January 2, 2010) that it is incorrect to refer to John Brown as a "complex man."  Certainly, we all are multi-faceted and complex as humans go, but some people are clearly more complex, complicated, and even contradictorily complex, and I just don't think the Old Man fits any of those descriptions.  In fact, the more one studies him, the more one will find that he's fairly straightforward, consistent, and perhaps even predictable.  Attributing complexity to Brown has been done by his admirers and his enemies, obviously for different reasons.  But either way, I believe the "complex" label is ill-fitted to the man.  In fact, despite this line in Atwater's piece, I think he clearly and correctly argues for a lack of complexity by pointing out that John Brown was not a "cold father," but instead was a loving man who tenderly cared for his children.
Posted by Louis A. DeCaro, Jr. . . at 12:46 PM