Lake Placid, North Elba, N.Y. - Climate Justice will be the focus of this year’s annual John Brown Day on Saturday, May 7, 2011. A tradition dating back to the 1930s, John Brown Day is held each year at the John Brown Farm State Historic Site in Lake Placid, NY, to honor one of the nation’s most influential abolitionists on the anniversary of his birth in 1800. 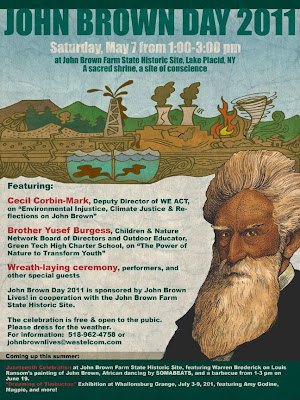 Dedicating his life to eradicating slavery, Brown eventually risked all attacking the federal arsenal at Harper’s Ferry, Virginia, in 1859. Captured by troops led by Robert E. Lee and J.E.B. Stuart, Brown’s trial and execution are considered by many historians as the spark that ignited the Civil War 150 years ago.

Climate Justice is a growing global movement that recognizes that poor and disenfranchised peoples around the world bear the least responsibility for climate change but face a disproportionate burden from its attendant effects, such as compromised health, economic hardship from rising energy costs, and displacement, destruction of property, and death due to extreme natural disasters. Here in the United States, the global campaign for Climate Justice is deeply linked to the Environmental Justice Movement, which is entering its third decade of militant opposition to environmental racism.

As people across the North Country recover from the record-breaking rains and flooding of the past week, John Brown Day keynote speaker and Environmental Justice leader Cecil Corbin-Mark will describe the evolution of the Climate Justice Movement and give voice to the rights and concerns of the people who are usually the first and often the hardest hit by the impacts of global warming.

Corbin-Mark is Deputy Director of the Harlem-based organization, WE-ACT for Environmental Justice. In addition to his work in New York, Corbin-Mark has been active in United Nations and alternative global climate conversations from Copenhagen to Cochabamba to Cancun.
“Like slavery in antebellum America, climate change is one of the most important moral issues of our time,” said Martha Swan, director of the freedom education project John Brown Lives! which organizes the yearly event.

“Brown surely would have recognized that it is the world’s poor who disproportionately bear the brunt of climate change, so it is fitting that Climate Justice will be the focus of John Brown Day 2011. In this Sesquicentennial Year marking the start of the Civil War, we are honored that Cecil will be with us at this critical time.”

Other speakers at the annual event include Alice Kesey Mecoy, great-great-great granddaughter of John and Mary Brown, and Brother Yusef Burges. A trustee of the Children & Nature Network and an outdoor educator, Burgess will speak about the power of nature to transform youth. A frequent paddler on Adirondack waterways and former outreach and diversity coordinator for the state Department of Environmental Conservation, Burgess works to connect Albany-area youth with the natural beauty and environmental issues of the Adirondacks.

John Brown Day 2011 is possible with the cooperation of the John Brown Farm State Historic Site. The event is free and open to the public, and will be held outdoors under a tent.
For more information, contact Martha Swan, Director of John Brown Lives!, at 518-962-4758 or johnbrownlives@westelcom.com.