(SOME) WHITE FOLKS and “COUNTER-FACTUAL” HISTORY

This kind of rationale tends to reflect a racially privileged mentality, one which assumes that the most important counter-factual outcome would involve the priorities and well being of whites, not the four millions of enslaved blacks whose freedom was ultimately wrought from the Civil War. Of course, this kind of counter-factual judgment assumes, for instance, that Lincoln had peaceful options that could have worked better had he tried them, or that the abolitionist movement might have been more successful if they had employed the tactics of the Civil Rights movement, like non-violent marches and protests, etc. That is, if only we could have done without John Brown.
When “counter-factual history” functions this way, it is not simply asking what outcomes might have taken place if C or D had happened instead of A or B. Rather, “counter-factual history” becomes a means of suggesting a negative political viewpoint while allegedly remaining “on the right side of history.”
A recent example of this kind of “counter-factual” revisionism is found in a conflict resolution program entitled, “Kansas Settlers Try Again,” led by Thea Nietfeld. Nietfeld is a minister who teaches nonviolence and serves a Unitarian Universalist community in Salina, Kansas. According to the Morning Sun of Pittsburg, Kansas, Nietfeld has developed her program in part to “consider what would have changed” in antebellum Kansas “with modern dispute resolution techniques.” Nietfeld was struck by the bloody history of the Kansas territory particularly after she drove past the site of the Marais des Cygnes Massacre in Linn County, where five free state men were gunned down in cold blood by pro-slavery terrorists.
“Walking around the site, I was learning all about people like John Brown,” Nietfeld said. “This land is bloody. No wonder it’s a part of this state. It made me wonder what life would have been like otherwise. What if the early settlers’ intentions had been to settle differently?”
This week Nietfeld had groups of people role-playing early Kansas characters, including John Brown.  Participants were directed to follow steps toward conflict resolution laid out by Nietfeld. Each group was directed to develop their own solutions to the historic crisis of “Bleeding Kansas.” One group’s solution was “to have a series of annual meetings to get all the early leaders together twice a year.” The next group’s “solution included the state establishing a legal system that everyone could respect,” and the third group “proposed the state enter as a slave state, but phase out slavery and phase in women’s suffrage.”
Nietfeld acknowledged that the exercise was “counterfactual theater,” but felt it could help people in reaching solutions to contemporary political crises. “I wanted us to recognize that the people who made early Kansas had choices,” Nietfeld said. “They did things the way they did, but it could have been otherwise. Just like we have our own choices in our own lives. We need to be conscious of our power to make history.”
Clearly, this kind of “counterfactual” reflection goes beyond the basic “what if” question of history. In Nietfeld’s case, not only do we have a person who privileges pacifist ideology, but also someone who clearly thinks within a kind of bubble of white priority. It is evident enough that this kind of “counterfactual theater,” like some academic counter-factual arguments along these lines, does not prioritize the victims of slavery. What’s going on here is an exercise in white privilege—that is, white people freely imagining the past “as it could have/should have been,” and doing so as if their concerns over “violence” are at the center of history—not the issue of black enslavement with all of its violence, racism, and exploitation. 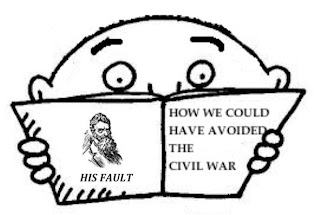 By emphasizing “choices,” and by saying “that it could have been otherwise,” Nietfeld is also implicitly saying that John Brown and other free state militants were wrong, and that they could have resolved the crisis of territorial Kansas without the shedding of blood—a notion that is untenable. This kind of imagining is not counter-factual as much as it is politically self-serving historical denial. Nietfeld is implying what should have been; she’s saying that whites should not have killed each other over slavery because they could have worked out a solution that would have been mutually agreeable—to themselves. One of her groups thus personified this thinking by concluding that Kansas might have entered the Union as a slave state, but phased out slavery over time. Obviously, this gradualist approach clearly subordinates black freedom to white expedience. This is not merely counter-factualism: It is denial and revisionism.
It is one thing to ask, what would have happened if the South won the Civil War, or what would have happened if John Brown had successfully escaped with his men to the mountains and launched his liberation effort. It is another thing to use counter-factual thinking to insinuate that white society might have served itself better in the process of dealing with the thorny question of slavery.