At the Kansas Historical Society

John Brown, the famous abolitionist, used this compass as a ruse to spy on proslavery men in Kansas Territory.
When John Brown was a teenager in Ohio, he taught himself surveying using a tattered copy of Flint's Survey, a standard text for the profession. He practiced surveying in the evening after working in his father's tannery all day. Throughout Brown's adulthood, surveying was a profession to which he occasionally returned.  These skills certainly came in handy when Brown came to Kansas in 1855 to fight for the free-state cause.
Spying in Kansas
The famed abolitionist is said to have used this equipment mostly in Anderson, Linn, and Bourbon counties in Kansas Territory. Two of Brown's sons usually accompanied him to operate the rod and chain.  He also formed a partnership with Simon McGrew, who settled southwest of Mound City and had been trained as a surveyor. Brown and McGrew often worked together on survey projects. Like his friend, McGrew was an outspoken anti-slavery advocate. Known as "The Fighting Quaker," he was opposed to war and violence but kept a pair of Colt Navy revolvers on hand for protection. Very likely both men used their surveying skills as a pretense for tracking proslavery men.
A Meeting with John Brown 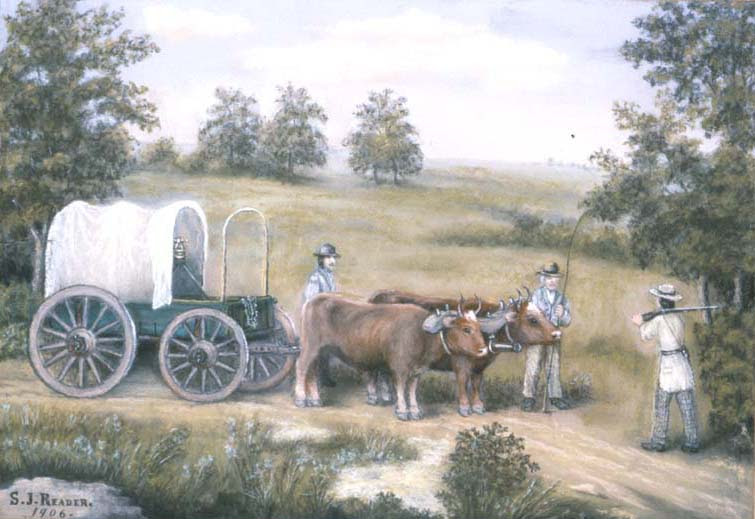 Samuel Reader, an early settler of North Topeka and a chronicler of territorial life in Kansas, recorded his experience with John Brown in the pastel drawing pictured at left.   Reader was standing watch outside a camp of free-state men along Pony Creek in Brown County on Aug. 3, 1856 when he was approached by Brown in his wagon.  Reader directed the abolitionist to the camp's location.  Years later, Reader documented the event in this pastel, depicting Brown's surveying tripod set up in the wagon bed, and Reader directed him to the location of the camp.
When John Brown left Kansas for the last time in January 1859 (he was hanged for treason in December of that year), he sold the compass to his friend McGrew. It later passed to McGrew's son, Charles, who deposited it with the Kansas Historical Society in 1915. Charles McGrew was influenced to do so by his nephew, the Governor of Kansas--Arthur Capper.
Charles McGrew noted in 1915 that others had expressed interest in the equipment, from museums to collectors. McGrew did not want it to leave Kansas, however, saying, "John Brown's body lies a mouldering in the grave. But his soul goes marching on, and his compass shall never be sold."
Samuel Reader's daughter Elizabeth donated John Brown's surveying equipment following her father's death in 1914. The equipment was made in Troy, New York, by Phelps and Gurley, and includes the brass compass pictured above, two brass rulers, two brass protractors, and a plumb bob, all in their original storage case.  The set is in the collections of the Society's Kansas Museum of History.
SOURCE: “Cool Things—John Brown Surveying Compass.”  Kansas Historical Society (Topeka)
Posted by Louis A. DeCaro, Jr. . . at 10:01 PM