Frederick Douglass and the 8th Avenue Underground Railroad (i.e., Subway)
The other day I posted pics and articles about the Frederick Douglass Circle dating back to 1950 and culminating with images of the beautiful statue and park now situated on the circle.  But I forgot that there are also related images in the "underground railroad station" corresponding to Frederick Douglass Circle, namely the subway station at 110th Street (Cathedral Parkway), a local train stop where folks in my neighborhood can catch the B and C trains.  On both the uptown and downtown sides of the station are some wonderful mosaics by artist Christopher Wynter ("Migrations") pertaining to Douglass and the Underground Railroad.  The wheel theme that is featured in the fence along the eastern side of the above ground Frederick Douglass Circle park is also featured in these lovely mosaics.  Well, anyway, I snapped a couple of pics today on the uptown side. . . 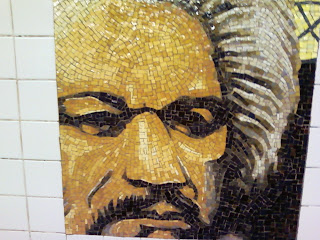 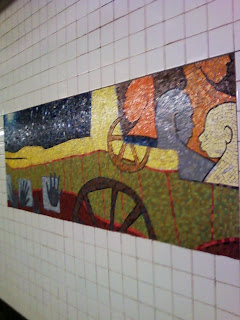 . . . then I found the following description along with images of both the uptown and downtown sides on the Metropolitan Transit Authority website:
Cathedral Parkway (110th Street)
CHRISTOPHER WYNTER
Migrations, 1999
Glass mosaic on mezzanine and platform walls
At Cathedral Parkway, Harlem's southern boundary, three large mosaic murals were created that refer to migration and African homelands. "Overall, the panels present the ideas of uprooting, migration, and progress in symbolic form," says artist Christopher Wynter. He further explains that the blocks of color differentiate various African ancestral homelands, and the circular symbol represents the n'kis, or sacred place concept, of the Nkongo people. Houses on stilts suggest Central African buildings, while horizontal bands of color denote village paths. Wheels and walking feet describe faraway destinations, according to Wynter, and reference the mass movements of Africans throughout history. The station is located below Frederick Douglass Circle. Douglass, the abolitionist crusader, is also depicted.
Uptown 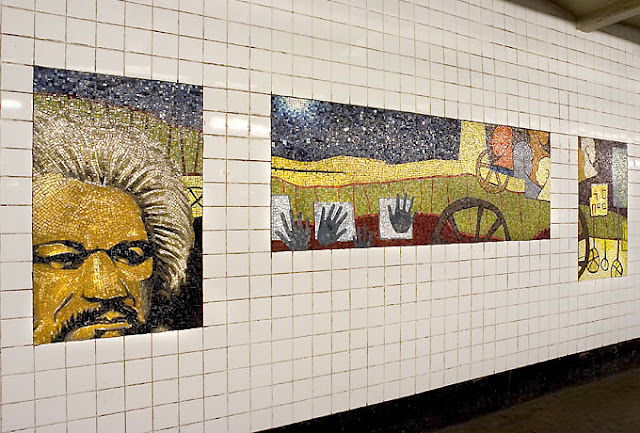 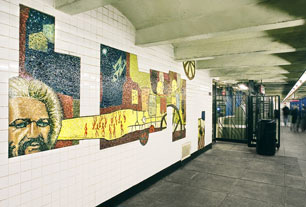