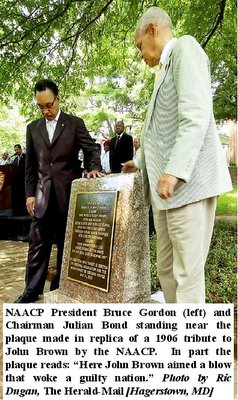 Speech by Julian Bond,
Chairman of the NAACP Board of Directors
at Harper's Ferry, West Virginia
July 14, 2006

To distinguished platform guests and friends. Our great thanks to all who have made this day possible.

We are here today because this place and the martyrs who died here are inextricably tied to the NAACP and the unending struggle for freedom. There is an unbroken line leading from this place until today – a line and lineage we are come to commemorate and honor so that future generations will never forget.

John Brown’s biographer David S. Reynolds argues that no other white person, including President Lincoln, has been so widely admired among American blacks as John Brown.

One of our founders, Dr. W. E. B. DuBois wrote of Brown as "the man who of all Americans has perhaps become nearest to touching the real souls of black folk. John Brown worked not simply for black men – he worked with them; he was a companion of their daily life, knew their faults and virtues, and felt, as few white Americans have felt, the bitter tragedy of their lot."

Generation after generation have praised him and held him up as an example of righteous wrath. From T. Thomas Fortune and Frances Grimke to Langston Hughes to Countee Cullen, Robert Williams, Eldridge Cleaver, H. Rap Brown, Malcolm X, a constellation of who’s who of black Americana has celebrated John Brown as the exemplar – the righteous Caucasian.

John Brown lived in an America where great social ills abounded – income inequality on a scope we cannot imagine, women without rights or votes, gross political corruption at every turn, environmental degradation far beyond today’s horrors, urban decay. But of all these, it was human slavery that repulsed Brown enough to lead him to make Kansas more bloody – and later, brought him here to Harpers Ferry.

Slavery, to Brown, was "the sum of all evils." And slavery seemed to Brown and others to be fixed, cemented in the culture, immovable. It denied millions their rights and dignity.

"No other social phenomenon approached its wickedness. No other problem, thought Brown, required the use of arms."

It was because of what happened here that DuBois chose Harpers Ferry for the Niagara Movement’s second gathering in August of 1906. Here women were invited to join the Niagara Movement, and here DuBois outlined what the struggle for freedom was about. He wrote:

"We claim for ourselves every single right that belongs to a freeborn American, political, civil and social; and until we get these rights we will never cease to protest and assail the ears of America. The battle we wage is not for ourselves but for all true Americans."

In 1932, as part of the 23rd Annual NAACP Convention, Dr. DuBois led a pilgrimage to Storer College to place a memorial tablet here to commemorate the great service and sacrifice of John Brown to the cause of human freedom.

The effort was not as welcomed then as it is now. DuBois' plans were frustrated in 1932, but today we have taken up his unfinished work from all those years ago. In a speech here then, W.E.B. DuBois captured for all time the unsettling meaning of Brown's legacy:

"Some people have the idea that crucifixion consists in the punishment of an innocent man. The essence of crucifixion is that men are killing a criminal, that men have got to kill him ... and yet that the act of crucifying him is the salvation of the world. John Brown broke the law; he killed human beings... . Those people who defended slavery had to execute John Brown although they knew that in killing him they were committing the greater crime. It is out of that human paradox that there comes crucifixion."

At that gathering, another NAACP founder, Dr. J. Max Barber said "The ideals of John Brown are being carried forward by the National Association for the Advancement of Colored People". And so they are today, 74 years later.

Frederick Douglass and John Brown had been friends long before the raid. Douglass wrote:

Brown had mentioned his plan to Douglass as early as 1847. The two men met for the last time on August 19, 1859, in an abandoned quarry near here in Chambersburg, Pennsylvania. For three days, the two men discussed whether violence could be legitimately used to free the nation's slaves. Douglass, in the end, refused to join his friend in the raid.

When Douglass spoke at the commencement here on May 30, 1881, the man who had prosecuted John Brown and sent him to the gallows sat on the Storer College platform directly behind Douglass. But that did not stop Douglass from explaining what John Brown had meant in 1859 or in 1881 or predicting what he would mean in the years ahead.

Douglass said: "With John Brown, as with every other man fit to die for a cause, the hour of his physical weakness was the hour of his moral strength—the hour of his defeat was the hour of his triumph—the moment of his capture was the crowning victory of his life. With the Allegheny Mountains for his pulpit, the country for his church and the whole civilized world for his audience, he was a thousand times more effective as a preacher than as a warrior …"

"If John Brown did not end the war that ended slavery, he did at least begin the war that ended slavery. . . . Until this blow was struck, the prospect for freedom was dim, shadowy and uncertain. The irrepressible conflict was one of words, votes and compromises. When John Brown stretched forth his arm, the sky was cleared." So we gather to honor the man and the standards of justice and equality for which he stood. We hope to remind America of freedom’s costs and to call forth others with the John Brown spirit.

Gabriel Prosser and Denmark Vesey were his compatriots. Nat Turner and Toussaint L’Ouverture were his inspiration. The modern day freedom movement was his offspring

In his autobiography, Dr. DuBois summed up what John Brown meant for all time.

"We do not believe in violence, neither in the despised violence of the raid nor the lauded violence of the soldier, nor the barbarous violence of the mob; but we do believe in John Brown, in that incarnate spirit of justice, that hatred of a lie, that willingness to sacrifice money, reputation, and life itself on the altar of right. And here on the scene of John Brown's martyrdom, we reconsecrate ourselves, our honor, our property to the final emancipation of the race which John Brown died to make free."
Posted by Louis A. DeCaro, Jr. . . at 10:11 PM