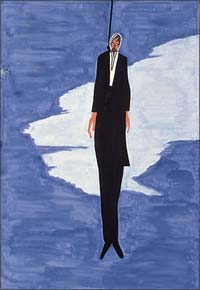 BALTIMORE — About 74 years ago, W.E.B. Du Bois led the NAACP from the group’s convention in Washington to a historically black college in Harpers Ferry, W. Va., to lay a tablet to honor militant abolitionist John Brown.

But Storer College officials objected, saying it was too militant.

Friday, as the NAACP gathered for its 97th convention in Washington, the group’s officials took a vintage train ride to Harpers Ferry to lay a tablet in a town where Brown captured a government arsenal in 1859.

Julian Bond, the chairman of the National Association for the Advancement of Colored People, said the raid sent shock waves through the country — 16 months before the Civil War — spreading fear in the white South and causing abolitionists in the North to celebrate Brown’s actions as heroic.

“Most condemned the violence but celebrated the impulse, and I think that that’s generally true today,” Bond said. “They’re not celebrating the violence that he perpetuated. They’re celebrating his commitment to racial justice, and we think it’s fitting to continue that celebration.”

The tablet laid Friday includes the original language, which expresses the NAACP’s gratitude for Brown’s actions. It is the same design and layout of the original.

“With him fought seven slaves and sons of slaves,” the tablet says. “Over his crucified corpse marched 200,000 black soldiers and 4,000,000 freedmen singing ‘John Brown’s body lies a-mouldering in the grave but his soul goes marching on!”’

The re-enactment was part of a series of NAACP events leading to the organization’s centennial celebration in 2009.

In the late 1850s, Brown and 21 others occupied the arsenal at Harpers Ferry in what is now West Virginia to start a “war of emancipation.” The next day, a company of Marines under Col. Robert E. Lee took Brown’s last stronghold by assault. Ten people were killed or mortally wounded, including two of Brown’s 20 children.

Brown was convicted of treason to the Virginia Commonwealth and conspiracy to murder.

Harpers Ferry has a special place in the history of the NAACP. It was where the Niagara Movement, which Du Bois founded as the cornerstone of the modern civil rights movement, held its first meeting on U.S. soil in 1906. (The first meeting was in Canada.) 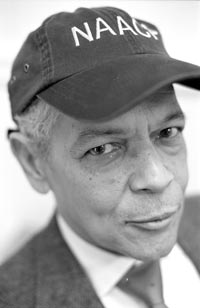 by Louis A. DeCaro Jr.

It is well and good that the NAACP would acknowledge John Brown in following the example of civil rights leaders in 1906, as well as following the lead of the Congress on Racial Equality (CORE), whose leaders placed a wreath on Brown's grave this past May.

However Julian Bond's remark to the effect that the NAACP is "not celebrating the violence that he perpetuated" is insulting and shows the extent to which Bond's understanding of Brown has been imprinted with historical error, and perhaps even reveals a level of intimidation and hypocrisy in the thinking of the civil rights leader.

For an African American leader to speak of John Brown "perpetuating" violence in the context of a nation steeped in slavery and racism is not only proof of deficiency in historical understanding, but an insult to the man he claims to be honoring. Bond is undoubtedly sincere and well-meaning, but his remarks class him among a set of 20th century black intellectuals who embraced the status quo profile of John Brown contrived mainly by elitist European American male scholars. In contrast to fearless, unapologetic black writers like Lerone Bennett and John O. Killens, Julian Bond joins the ranks of black "admirers" like Benjamin Quarles and Ralph Ellison, who were apparently intimidated by the reactionary historical ban on John Brown that prevails in liberal and conservative narratives. Like Quarles and Ellison, Bond would both praise and incriminate Brown at the same time, putting forth his lame distinction between Brown's alleged role in "perpetuating violence" and his sterling commitment to racial justice.

John Brown did nothing to “perpetuate violence” despite all the rhetoric and hearsay that is reported as history in the United States. Indeed there is still a lack of fair and accurate analysis of Brown's efforts in Kansas and Virginia, and despite his role in certain violent episodes, it is highly unfair to blame him for perpetuating the theater of blood and brutality that was the United States in the 19th century. As the historical record actually shows, John Brown made every effort to conduct a campaign of minimalist force in Virginia, endeavoring to destroy the economy of slavery without massacre and insurrection. When initiation of that plan failed at Harper's Ferry in 1859, Brown happily went to the gallows to demonstrate his commitment to opposing slavery with every fiber of his being.

One must finally ask Mr. Bond if he would issue such a gratuitous, half-baked defense of Nat Turner, Gabriel (so-called Prosser), or Denmark Vesey--all black men who either used violence or intended to "perpetuate violence" in order to oppose slavery. If he would answer in the affirmative, what would the black community's reaction be toward such double-mindedness? But if he refused to apologize on behalf of blacks who either killed or intended to kill pro-slavery whites, then he would surely seem self-contradicted and perhaps even hypocritical for doing so on behalf of Brown, even if he were a perpetuator of violence.

John Brown could do without the shabby apologetics of Julian Bond. His timid remarks are a far cry from that of Frederick Douglass who, at Harper's Ferry in 1881, emphatically declared that when "John Brown stretched forth his arm the sky was cleared. The time for compromises was gone – the armed hosts of freedom stood face to face over the chasm of a broken Union – and the clash of arms was at hand. The South staked all upon getting possession of the Federal Government, and failing to do that, drew the sword of rebellion and thus made her own, and not Brown's, the lost cause of the century."

This comment is on Lou DeCaro's posting about Julian Bond's commemoration of the NAACP event of 1932 attempting to place a tablet honoring slaves who fought for their freedom with John Brown and in the Civil War.

Julian Bond managed to backstab the local black people who protested the refusal of the white president of Storer College to erect the tablet designed by W.E.B. Du Bois and the NAACP in 1932 while backhanding John Brown with a politically correct and thoughtless statement about "perpetuating violence."

Lou DeCaro has done an excellent job of describing the violence vs. nonviolence arguments of the 19th century surrounding John Brown.

Julian Bond, moreover, has ignored the history of the 1932 event that the NAACP was commemorating, during which time Pearl Tatten, the music professor at Storer College and the director of the choir assembled, made a public statement in support of the NAACP tablet that was rejected.

This was a brave act in 1932, especially considering that the group had just been addressed by Ada Bashinsky, president of the Daughters of the Confederacy, honoring the "faithful slaves and black mammys" of the South during the Civil War.

Miss Tatten, before leading the choir, announced that she was proud to wear the Blue during the Civil War, and was not a "black mammy" type.

The Associated Press is equally culpable in skewing history in their brief history of the John Brown raid on the Federal Arsenal at Harpers Ferry. It looks to me as if they have taken it straight from the website of PBS American Experience for the unfortunate film "John Brown's Holy War," perpetuating those errors and inaccuracies as well as their pompous "antiviolence" point of view.